The Commission had adopted the proposal to postpone the MDR on 3 April and it was subsequently supported by the European Parliament on 17 April. Finally, the Council voted yesterday to adopt the proposal. The amendment to the Medical Devices Regulation 2017/745 postponing the date of application by one year was published in the Official Journal of the European Union today.

The adopted amendment postpones the application of the medical devices regulation by one year – until 26 May 2021. The rules currently applicable will continue to ensure the health and safety of patients.

FEPPD is informed that the EU Commission on the 3rd April, has decided the postponement of the date of the coming into force of the MDR from the 26th May 2020, to that of the 26th May 2021.

The Commission took this decision in support of the Member States Competent Authorities, the Notified Bodies and other entities associated with the proper managing of the Regulation since the actual limitations brought about by the COVID-19 reality will impede such operators from exercising to their best performance and with the best results possible, the management of the MDR.

This decision by the Commission has to be supported by the European Council and the EU Parliament in line with the organisational and legal criteria as provided by the statutory provisions permitting such a postponement of the coming into force of an E U law.

In the light of this situation, the Commission deems that the MDR will be in transit from the MDD for another 12 months, and hence all medical devices put on the market shall follow the obligations as subscribed under the Medical Devices Directive.

An official date as to when both the European Council and EU Parliament would support the Commission’s directive is not known as yet, but it is predicted to happen in a short timeframe given the urgency of the action to be taken.

As soon as this consent is given by these Institutions, and the change of date of the coming into effect of the MDR is confirmed, the Commission will render it public on its official journal and correlative media.

FEPPD will also make such news available to its Members. 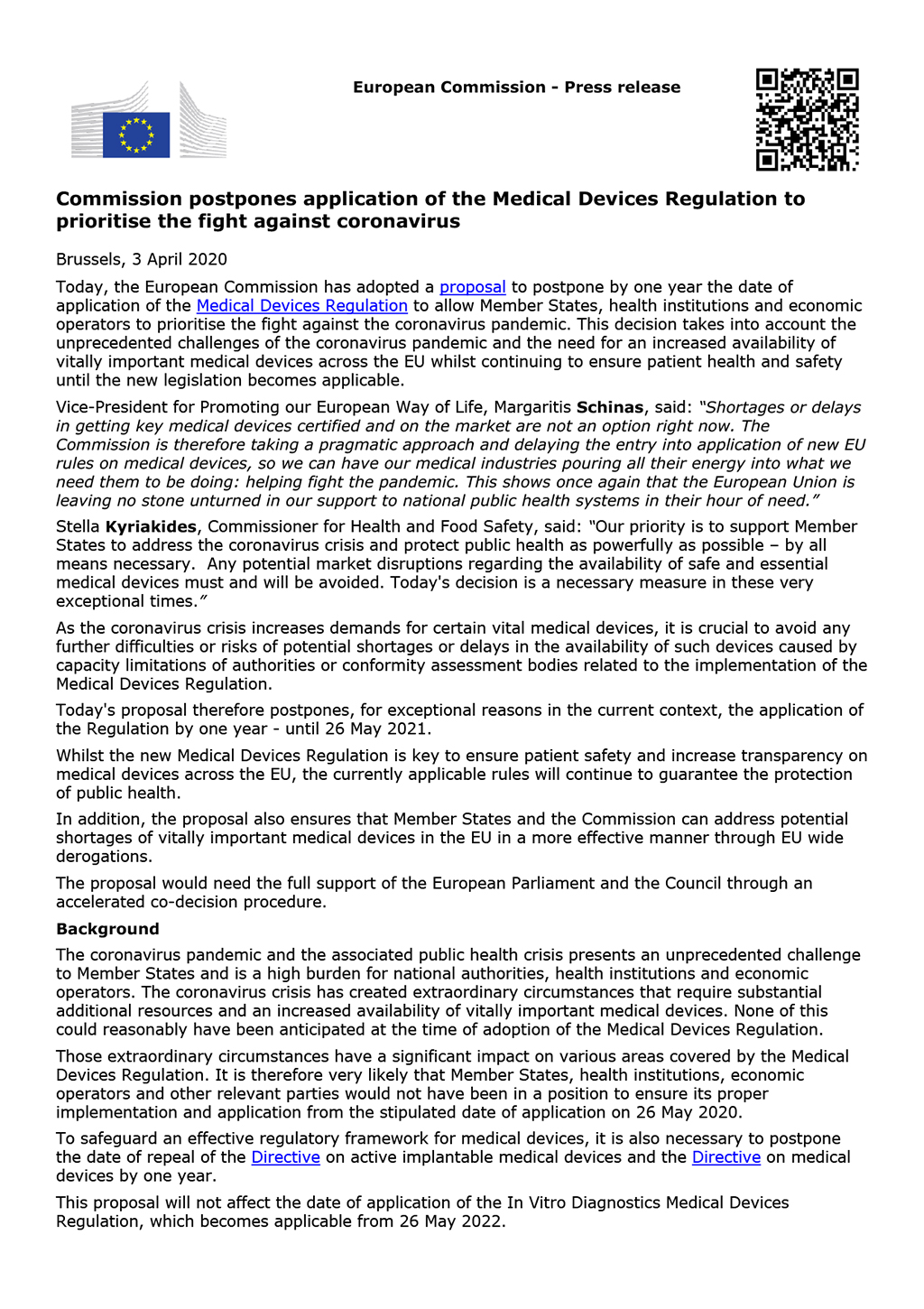 FEPPD is being informed that various stakeholders in our sector, in the light of the COVD-19’s impact on Health Authorities dealing with the pandemic, were advising the Commission to postpone the coming into force of the MDR as scheduled, May 26th of this year.
It is being argued that since most E U States Health Ministries are totally focused on fighting the ongoing pandemic across Europe, including all their backup recources such as the Competent Authorities that had to govern the MDR, and since such entities cannot handle and follow the right implementation of the said Regulation for the moment being, the issue was being put at the attention of the EU Parliament for it to take a decision in merit.
It is expected that a vote with regards to the issue be taken in the European Parliament, following which The Commission will communicate it to all EU States with the way forward.
It is understood that the Commission wants to implement the MDR to its full scope and essence, and the present situation does not guarantee such a delivery. Thus, if such postponement had to occur, the MDR process will keep being in-transit from the MDD, with manufacturers to keep complying with the Directive’s obligations.
FEPPD is following closely this issue, and will be informing all its members of the decision taken by the Commission.
We do understand each and everyone’s disappointment over such possible postponement, as the Federation itself has worked at length to see the MDR coming into force, as much as we realise that this impasse came about by the force majeure course of events brought about by the Coronavirus pandemic.

Who is hiding behind your crown ?

Back on this event across Europe